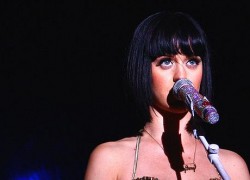 Billboard has named Portuguese-American vocalist, Katy Perry, its woman of the year.

Last Sunday, Katy Perry turned the spotlight on volunteers for the Trevor Project as the suicide prevention organization presented her with an award for championing gay rights.

Last January, Perry was honored as favorite female artist, at the 38th annual People’s Choice Awards, in five categories for tour headliner and for song of the year for “ET” with Kanye West, music video for “Last Friday Night” and TV guest star for “How I Met Your Mother.”

Last year, in August, she was the biggest winner at the 2011 MTV Video Music Awards with Video of the Year for “Firework”, Best Collaboration, and Best Special Effects. She re-released the album this year, which launched two more hits and a top-grossing 3-D film.

The 26-year-old singer and songwriter, who has acknowledged her Portuguese heritage, was born in Santa Barbara, California, from parents of German, English and Portuguese descent, more specifically “Azorean” with roots in Horta, Faial island.

Interview: Katy Perry in Portugal talking about her Portuguese roots (2009)