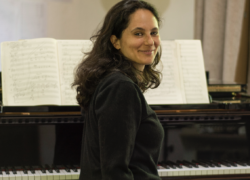 The New York Philharmonic Orchestra will premiere the work, Os Pássaros da Noite [The Birds of Night], on March 17-19, by Portuguese composer Andreia Pinto Correia, under the direction of conductor Gustavo Dudamel who will also direct Robert Schumann’s third and fourth symphonies.

According to the New York Philharmonic Orchestra’s website, the piece was commissioned from the Portuguese composer as part of a performance series dedicated to Robert Schumann, which will take place throughout March at the Rose Theater in New York.

The series titled, The Schumann Connection, will explore the relationship between German composers Robert and Clara Schumann. The program, featuring interpretations of the works by the tow Romantic period composers-pianists, will concur with performances of other contemporary pieces by composers Nico Muhly and Gabriela Ortiz.

The composition, The Birds of Night, was inspired by a line on a letter penned by Robert Schumann to his friend Johann Verhulst. He wrote, “We are all pretty well; the melancholy birds of night still flit round me from time to time, yet they can be driven off by music.”

Andreia Pinto Correia, born in Lisbon in 1971, began her musical studies in her native Lisbon at the Academia de Amadores de Música and at the Escola de Jazz Luíz Villas-Boas. She received her Masters and Doctoral of Music degrees from the New England Conservatory of Music in Composition as a student of Bob Brookmeyer and Michael Gandolfi, having received additional mentorship from composers John Harbison and the late Steven Stucky. She attended the Minnesota Composer Institute, the European Network of Opera Academies (ENOA), the American Opera Projects (AOP), the Composers Conference, and the Tanglewood and Aspen Festivals. She currently resides in Brooklyn, New York.

Besides Portugal, Brazil, the United States, her compositions have been performed for many international audiences in Europe and around the world. Honors include a 2020 Arts and Letters Award in Music by the American Academy of Arts and Letters, a John Simon Guggenheim Memorial Foundation Fellowship, and commissions from the European Union Presidency, League of American Orchestras and the Toulmin Foundation, Washington Performing Arts (Kennedy Center), Fromm Music Foundation at Harvard University, Tanglewood Music Center, Boston Symphony Orchestra Brass Quintet, American Composers Orchestra at Carnegie Hall, Calouste Gulbenkian Foundation, Andrew W. Mellon Foundation, Chamber Music America, Albany Symphony Orchestra, National Symphony and National Dance Company of Portugal, and Culturgest/National Bank of Portugal, among others.