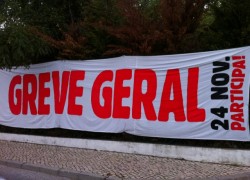 The leaders of Portugal’s two union confederations, CGTP and UGT, held a joint press conference in Lisbon Thursday to weigh up the day’s events. Asked if they would hold further protests, they said it was a serious possibility.

After considered the general strike a “success,” they acknowledged they were ready for another general strike if the government did not sit down at the negotiating table.

“If the government forces us to play our hand, we will call another general strike, but we would prefer to sit round a table and discuss matters,” said UGT leader João Proença.

The Thursday strike was thought to be among the biggest in Portugal’s history with hundreds of thousands of workers taking part in the action. Demonstrations were held in all 20 district capitals and in 14 other towns and cities.

In a strike on the same day in 2010, the CGTP said 3 million people took part in the nation of 11 million.

The Thursday shutdown was third general strike since Portugal regained democracy in 1974 and only the second time the CGTP and UGT organized a joint strike.

Many were protesting against the government’s austerity measures, such as the non-payment of Christmas and holiday bonuses to public sector workers and pensioners and a 30-minute extension to the normal working day for the private sector.

One demonstrator was hurt and seven were detained by the Police outside Parliament after a protest march, a police source said.

Two tax offices in Lisbon were also attacked with petrol bombs and the police confirmed that the office windows were smashed while a third tax office had cans of paint thrown at it.

Most of Portugal’s public services were brought to stand still. The strike caused havoc with public transports and airports, public schools, courts and tax offices all closed.

Much of the disruption was centered on the transport sector. Airlines canceled hundreds of international flights, regular bus or train and subway services were stopped.

Turnout for the strike and figures provided by the government showed just 10.5 per cent of public sector workers had walked out with only 12,800 out of a total of 355,305 workers joining the strike.

Parliament will vote next week on a deficit reduction plan being imposed as a result of an international bailout.

Portugal is getting 78bilion-euro ($104 USD billion) under a financial rescue program agreed last may with the European Union, and the International Monetary Fund.

Portugal was the third Eurozone country after Greece and the Irish Republic to receive a bailout. Further installments of the emergency loans could be withheld if Lisbon does not meet targets for deficit reduction.