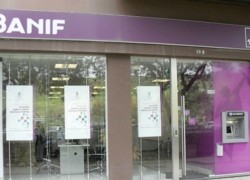 Moody’s explained that the downgrade was due to the reduction in Portugal’s sovereign rating and was in line with other Portuguese banks that had been downgraded in early April.

Banco Internacional do Funchal, commonly abbreviated to BANIF, founded in 1988, is a Portuguese international bank with a presence in Europe, South America, North America, Africa and Asia.

In the Azores and Madeira BANIF Bank has a market share of 34% and 26% respectively.

On June 9, Moody’s placed seven Portuguese banks under review for a potential downgrade due to pressure on Portugal’s sovereign credit profile and a challenging operating environment which will further restrict banks’ access to market funding and capital.

According to Moody’s the “Bank Financial Strength Ratings” issued were affected by the credit profile of the country also on risk of a further downgrade by the agency.

Moody’s last downgraded ratings for the country’s banking sector was on April 6.