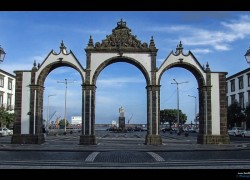 Moody’s Investors Services downgraded Friday the debt rating of the Azores from B3 to B1, four notches below investment-grade status to a negative outlook, leaving the door open for another possible cut.

The rating agency considered that there are “significant risks” in financing the Autonomous Region which has very high levels of direct and indirect debt and very limited access to financing from Portuguese sources.

Recognizing that the Azores had a budget performance “satisfactory” in 2010, Moody’s also considered that its debt is deteriorating “rapidly.”

Moody’s reported that the increase in the Azorean debt is mainly due to the large financing needs of its public enterprises, particularly those in the health sector.

In a statement, Moody’s concluded that the country’s weak economic outlook will limit regional tax revenues, which, combined with a decrease in state transfers, is likely to increase the pressure on the region’s finances in the short and medium term.

In October the rating agency had cut Madeira’s rating from B1 to B3, downgrading its debt to negative outlook. Early in July, Moody’s had downgraded Portugal’s sovereign debt from Baa1 to Ba2, to “junk” status negative outlook.