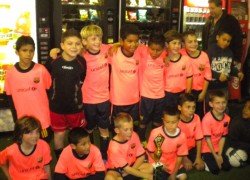 The Mineola Portuguese Soccer Club’s (MPSC) youth division continues its dominance in the U7, U8 and U9 divisions all over Long Island and the East Coast, adding championships number five, six, and seven for 2011 over the Thanksgiving Day weekend.

The youngest of the Mineola teams, the MPSC-Lightning (U7), won 1st place in the Plainedge Kids Helping Kids Charity Tournament, while their “older brothers” the MPSC-Thunder (U8) won the Long Island Rough Rider Thanksgiving Day Friday tournament.

“We are all tremendously proud of our boys and with a U10 team in the works for 2012; I can only imagine where this program is going,” said General Manager Gabriel Marques.

The MPSC is an amateur adult/youth soccer club that was founded in 1936, officially registering with the Long Island Soccer-Futebol League (www.lisfl.org) in 1948. Mineola was the fifth club ever to win a championship in the then newly formed league, winning in 1954 and again in 1956.

Since then, MPSC has developed over a dozen professional players and won more than 100 soccer tournaments and events, including 4 New York State Championships (1966, ’81, ’85, ‘11) in its 75 year history.