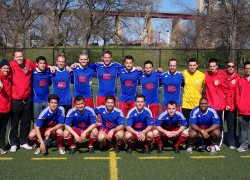 According to a press release issued by the New York based Mineola Portuguese Soccer Club (MPSC), the Long Island team is once again the center of attention in the world of amateur soccer, on its way for the most prestigious amateur competition in New York — the Manning Cup — after eliminating Sunday, April 17, the Central Park Rangers last year’s finalists.

Behind a goal by Shane Arikian and Frank Spanos, the MPSC easily moved through the semi-finals, dispatching the team that knocked them out in last year’s semi-final.  Mineola’s 1st team now looks forward to battle with 2008 National Open Champions NY Pancyprian-Freedoms (Astoria) up in Yonkers on June 12th (Portuguese Independence Day weekend) for the Manning Cup.  Mineola last won the Manning Cup back in 1981.

The club, which fields two division 1 teams, has seen incredible success this year, winning 30 games of 35 this season and scoring a total 110 goals so far with a 2.5 a game average.

The MPSC is an amateur soccer club founded in 1936 and officially registering with the Long Island Soccer-Futebol League (www.lisfl.org) in 1948. Mineola was the fifth club ever to win a championship in the then newly formed league, winning in 1954 and again in 1956. Since then, MPSC has developed over a dozen professional players and won more than 100 soccer tournaments and events, including 3 New York State Championships (1966, ’81, and ’85) in its 75 year history. The MPSC is currently registered in the 1st Division with the Long island Soccer-Futebol League (LISFL), Eastern New York State Soccer Association (ENYSSA), and the United States Adult Soccer Association (USASA).