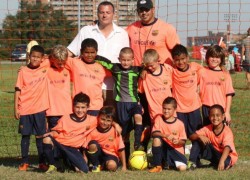 The Mineola Portuguese Soccer Club (MPSC) has became one the best soccer programs on Long Island. The 2011 New York State Manning Cup Champion, MPSC  will break a new record this spring by fielding 10 teams and over 200 players at one time.

MPSC’s premier team hopes to win the club’s first ever League Cup in the spring. “With the core of the team back and several key additions, we are looking for a strong close to the season” said VP of Operations and premier team captain George Spanos.

The relatively new youth division is also prospering. “We are getting applications to join every day, the club is acommodating everyone we can” said club President Marco Dafonte.

Now, with 7 teams in the 6-10 year-old age group “the sky is the limit,” said Dafonte playing off the pun that all youth teams are named after weather patterns. The existing three youth teams have yet to lose a single game in the 2011-12 season and have already brought home four prominent tournament cups.

Also, in the spring, the LISFL and President Gus Xikis have brought a nationally affiliated women’s soccer league back to Long Island – and the MPSC will be there too. With Woman’s Professional Soccer halting its 2012 season, professional and National Collegiate Athletic Association (NCAA) Division 1 student-athletes have already begun signing on to the first ever MPSC-Women’s team.

The MPSC is an amateur adult and youth soccer club that was founded in 1936, officially registering with the Long Island Soccer Football League (LISFL) in 1948. Mineola was the fifth club ever to win a championship in the then newly formed league, winning in 1954 and again in 1956. Since then, MPSC has developed over a dozen professional players and won more than 100 soccer tournaments and events, including 4 New York State Championships (1966, ’81, ’85, and ’11) in its 75 year history.