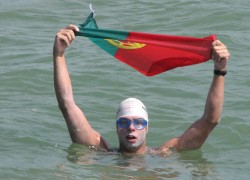 Solo swimmers and relay teams usually take about seven to nine hours to complete the marathon — the longest swimming event in the world.

The course started and finished at South Cove in Battery Park City on the Hudson River, just south of the North Cove Yacht Harbour.  Swimmers set out south around the tip of Manhattan, then counter-clockwise around Manhattan Island via the East River.

Miguel Arrobas is the first Portuguese ever to attempt to swim the 28.5 miles race, the equivalent to 52,78km, in a full counter-clockwise circumnavigation of the island of Manhattan.

For Miguel this is a very important challenge for his career. His next goal is to compete at the “Ocean’s Seven” project, an important step to conclude the “Triple Crown.” Another goal is to swim solo connecting the 9 islands of the Azores in 2012