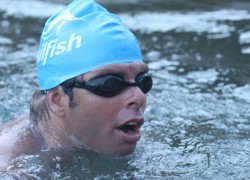 Miguel Arrobas is the first Portuguese ever to attempt to swim the 28.5 miles race, the equivalent to 45.86km, in a full counter-clockwise circumnavigation of the island of Manhattan.

The course starts and finishes at South Cove in Battery Park City on the Hudson River, just south of the North Cove Yacht Harbour. Swimmers set out south around the tip of Manhattan, then counter-clockwise around Manhattan Island via the East River. 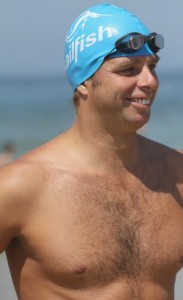 For Miguel this is a very important challenge for his career. His next goal is to compete at the “Ocean’s Seven” project, an important step to conclude the “Triple Crown.” Another goal is to swim solo connecting the 9 islands of the Azores in 2012.

About  how he will accomplish his Azorean swimming project, Miguel told the Portuguese American Journal, “I had really hoped to be able to plan this crossing for July 2011. However finding the necessary sponsorship proved impossible. I am now working on relaunching the idea for 2012 (June to August). The challenge was originally made during a radio interview for Antena 1 Açores and Peter’s Café showed their support for the idea immediately. The project foresees linking the São Jorge Island to Pico Island (27Kms) and Pico Island to Faial Island (7Kms). The only person to have ever completed the São Jorge – Pico swim was the American swimmer David Yudovin in 2008 with the time around 8 hours. My hope is to better this time.”

He said, “Being able to finish the Manhattan marathon is a huge motivation for me to continue, despite the difficulties, to conquer the next challenges included in the ‘Ocean’s Seven’ that has never been accomplished by any swimmer in the world.” 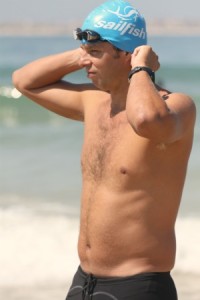 Miguel Arrobas, 38, a lawyer and father of 5, is a former Olympic swimmer. He participated in the 1992 Olympic Games in Barcelona, Spain. He was won various awards and is the winner of many individual and collective competitions at the national and international levels.  As a solo swimmer, he has accomplished many  goals and broken many records.

About his enthusiasm for swimming Miguel, said, “I started swimming at 1.5 years of age and felt that water is my element. At 17, I achieved the highest point of my competitive career representing Portugal in the 1992 Olympic Games. In 2001, I discovered the beauty of open water swimming.  As a personal challenge, I set myself the goal of swimming the English Channel and became the fastest swimmer of 2008, successfully crossing from England to France in 9h30m. This is one of the qualifying swims necessary for acceptance to participate in the Manhattan Island Marathon Swim next 18th of June. My two big goals at the moment are to officialize my intention of completing the “Oceans Seven” — pending sponsorship — and to over the course of my training eventually trace the Portuguese coast from Minho to Algarve.”

Swimming is very much part of his life. It requires discipline and commitment to the many causes he supports on behalf of environment preservation and scholarships for students.  He said, “The challenges I set myself grew as did the media attention I received. I soon realized that I could use this attention not only to promote swimming but also to raise awareness and funds for worthwhile causes and ideals. I was nominated Ambassador for the Year of the Dolphin in 2008 and raised funds for the United World Colleges which allowed a Portuguese student to attend the UWC-USA on a partial scholarship between 2009-2011. I promoted the Portuguese Association for Asperger’s Syndrome and have always sought to send an ecological message, highlighting the importance of marine ecosystems in the world.”

He also does it for his children. “My love for my children and the need to set an example for them about the importance of dreaming and working hard to achieve those dreams is the fuel that fires me when my arms get tired. I am a father of 5, so that’s a lot of fuel,” he said.

The first “Manhattan Island Marathon Swim” was held in 1927. Solo swimmers and relay teams usually take about seven to nine hours to complete the marathon.

NYC Swim organizes swimming events in the waters around Manhattan. Since 1993, NYC Swim has attracted well over 10,000 participants in more than 125 swimming races. In 2010, it was recognized for its work by being inducted into the International Marathon Swimming Hall of Fame.