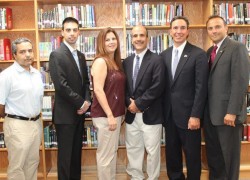 Starting with the 2012-13 school year, incoming eighth-graders at High School (MHS), New York State, will have the option to learn Portuguese as foreign language.

The waiver to introduced Portuguese into the foreign language curriculum was obtained through the effort of 7th Senate District Senator Jack Martins, who is of Portuguese descent.

Obtained from the State Education Department (SED), the waiver grants the high school permission to offer the class.The program is expected to grow over the next five years to include 9th through 12th grades.

The effort to introduce Portuguese as a foreign language in the MHS curriculum lasted for almost two decades, according to Paul Pereira, a teacher and coach at the Mineola High School.

Mineola boasts a large Portuguese immigrant population as well as many residents of Portuguese descent. Portuguese is a Romance language spoken by over 200 million people worldwide.