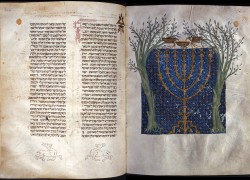 A rare 13th-century Hebrew manuscript, known as the Cervera Bible, is the central piece on exhibition in the Medieval Europe Gallery at The Metropolitan Museum of Art in New York City.

The exhibit “Lisbon’s Hebrew Bible – Medieval Jewish Art In Context” will be on display through January 6, 2012.

Designated as a national treasure, the painted manuscript was acquired by the National Library of Portugal in the 19th century, one of its earliest acquisitions.

Richly illustrated, the document is among the oldest and most significant Sephardi Bibles known, ranking among the most beautiful manuscripts created in Medieval Europe.

Extremely rare, the Cervera Bible is a manuscript on parchment in Hebrew language and characters was written and illustrated in Cervera (Lerida, Spain) in 1299-1300.

Although the names of most Medieval illuminators remain unknown, the signature of the Cervera Bible illuminator, Joseph Hazarfati, or Joseph the Frenchman, is recorded in the document. The scribe is also identified as Samuel ben Abraham ibn Nathan.

In the Metropolitan Exhibition, the pages of the Cervera Bible will be turned weekly, giving viewers the rare opportunity to see several of its beautiful illustrations.

Concurrent with the exhibition, the National Library of Portugal will, for the first time, make images of the entire manuscript available on its website. (Click on each picture for a full view).