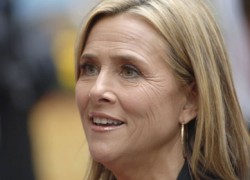 Meredith Vieira announced Monday she is leaving the “Today” show and NBC. Ann Curry will take over as co-anchor on June 9.

On her announcement Meredith Vieira said, “It’s a difficult day for me. I’m gonna try and hold myself together here, but after months of personal reflection and private conversations between my family and my friends, I have decided to leave Today in June.”

And she added, “Even as I say this, and I know it is the right thing, I’m really sad, because in the past — I like to say 10 years, but I know it’s only 5 — this has been my second home,” and she continued, “just humbled at what a great experience this has been for me.”

Reportedly Meredith Vieira is leaving her successful five year career at NBC to spend more time with her family and her ailing husband who is battling with both multiple sclerosis and colon cancer.

She said, “I really have had a great time. Time is one of those weird things, you can never get enough of it, it just keeps ticking away, but I know I want to spend mine with my husband Richard and my kids.”

Although it has been reported that Vieira may continue to have an occasional presence on the “Today” show and that she may play other roles at the national network, sources at NBC didn’t offer further details.

Vieira, who is 56 years old, joined the Today Show in September of 2006. Of Portuguese American descent she is known to have roots in Faial, Azores. Meredith Vieira Azorean Roots. >>