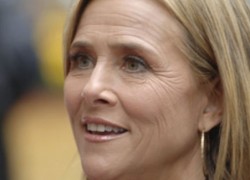 According to the Hollywood Reporter citing sources at the NBC television network, Portuguese American anchorwoman Meredith Vieira is considering leaving the “Today Show” at the end of her reported $11million annual contract expiring in September 2011.

Rumors that Meredith Vieira  could leave the the “Today Show”  are not new. Vieira, whose husband Richard M. Cohen suffers from multiple sclerosis, is not saying why she may leave, but she has said recently that she plans to spend more time with her family.

In an October interview with the Ladies Home Journal, the Today Show host revealed that her husband’s illness has changed their lifestyle and that she feels cheated sometimes because they are not able to do as much as they used to.

“We used to run together and go on ski trips or go to the beach,” she said. “Now, it’s very hard for Richard to stand. But we’re very lucky in what we do have.”

Vieira hinted that this could be her last year on the show. “I’ll know when it’s time to go, and I’m not afraid to go,” she said.

“If I were to leave the show at the end of next year because it’s time for me, I wouldn’t jump into another show.  I would look forward to not working, to traveling with Richard and carving out time for us.”

In spite of rumors, Vieira, who still hosts the syndicated game show “Who Wants to Be a Millionaire,” could decide to extend her contract for another 12 months as she did last year writes de Hollywood Reporter,