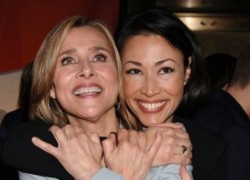 It has been reported that NBC will announce Meredith Vieira’s departure from the “Today” show as soon as next week, almost three months before the end of her contract with the national network.

The Portuguese American anchorwoman will be replaced by Ann Curry as the host of “Today” the top-rated morning news program. Vieira and Matt Lauer co-hosted the program for five years, while Curry has been serving as news anchor for 14 years.

There have been rumors of Meredith’s co-host Matt Lauer, also leaving the “Today” show when his contract is up to join Katie Couric in her new daytime talk show. Couric is the former “Today” show host and outgoing CBS Evening News anchorwoman.

Reportedly Meredith Vieira is leaving her successful five year career at NBC to spend more time with her ailing husband and her family.

She reportedly will continue to host the syndicated “Who Wants to Be a Millionaire,” and she recently produced her first movie, a drama about a female war veteran, titled “Return.”

Vieira, who is 56 years old, joined the Today Show in September of 2006. Of Portuguese American descent she is known to have roots in Faial, Azores.