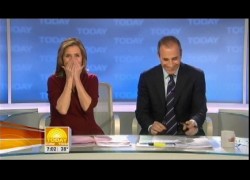 The Alliance for Women in Media (AWM) has announced that Meredith Vieira – co-anchor of the Today show  – is one of the winners of the 36th Annual Gracie Awards for 2011, created for women by women to recognize their outstanding contributions in the media.

The national Gracie Awards will be presented at the Gracie Awards Luncheon at the Beverly Hilton Hotel, Los Angeles, on Tuesday, May 24, 2011.

The Gracies Awards is presented by the Alliance for Women in Media (AWM) Foundation, the philanthropic arm of AWM which supports educational programs, charitable activities, public service campaigns and scholarships to benefit the public and women in the media.

Meredith Vieira is considering leaving the “Today Show” at the end of her reported $11million annual contract expiring in September 2011.

Meredith Vieira is a Portuguese American with roots in the Faial Azores.