Memoir: Revisiting the Journal of a Voyage to Lisbon by Henry Fielding (1707-1754) – Travel 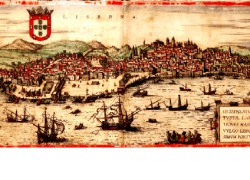 Henry Fielding is dying. His doctors, who have kept him alive by regularly draining fluid from his stomach, have ordered him to convalesce in a warmer climate. Since the famous author can no longer walk, his bloated and decaying carcass is hoisted by crane onto a ship bound for Portugal. Bystanders avert their eyes and sailors jeer at him. The scene, as recorded in his journal, is horrific and humiliating.

The writer of Tom Jones, and the progenitor of the modern novel form, is accompanied by his hopeful wife and two daughters. Privately, however, he has begun the notebook that he knows will end in the ellipses of his death, published posthumously in 1755 as The Journal of a Voyage to Lisbon.

It is a bizarre document; a record of quite literally sailing into the sunset—the ship heads west from the mouth of the Thames along the southern coast of England—that is by turns epic and farcically trivial. When it was published, contemporary readers expressed outrage that such a great man facing his own mortality could be so consumed with daily minutiae and the seemingly insignificant characters he encounters on board his ship.

Henry Fielding, circa 1743 etching from Jonathan Wild the Great

But it was precisely preoccupation with trivial details that set the novel form apart from pre-modern storytelling. The novel at its inception in the 18th Century was a new kind of writing marked by maintaining chronological consistency with actual historical events, employing given names as well as surnames for principal characters, establishing authenticity through detailed accounts of true-to-life experiences and forgoing classical plots in favor of everyday occurrences.

The unique form was established by Fielding—as it was also by Defoe and Richardson—through a technique of verisimilitude that plunged characters into the physical realm by emulating the style of evidentiary court reports. The stories invited readers to act as judge and jury for a series of supposedly truthful events, and unleashed a torrent of juicy particularities that kept an emergent reading class glued to the pages of the papers in which the serialized tales appeared.

However, as Fielding’s parting journal reveals, the new form was not just a representationally accurate technique designed to sell copies. The novel was also constitutive of a new way of conceiving individuality, one that gave greater significance to singularity of character than ever before.

Fielding curiously wrote a formal preface to his dying-days journal. In it, he complains, “I should have honored and loved Homer more had he written a true history of his own times in humble prose, than those noble poems that have so justly collected the praise of all the ages.” Can we take him seriously? This being Fielding, not wholly—but over the course of the journal he confirms his abiding preference for realism and its concomitant preoccupation with original character. In fact, he often fictionalizes aspects of the real life individuals he encounters to suit his novelistic criteria.

As in Tom Jones, what leaps out from Fielding’s journal pages are mock-heroic, vivid people. And the author himself—split between scribe and decaying body—becomes a subject in the tale as well. The writing begins to function as the record of a taxonomist on the prowl for notable and new species to talk about—his wife, the ship’s captain, a stingy innkeeper, two churchgoers—until it is clear that it is through searching for novel specificities that Fielding is clinging to life. We see him wrestling, finally, not with mortality, but with the fundamental irreducibility of one character to another.

Henry Fielding grave in the Anglican cemetery in Lisbon, Portugal

On Sunday July 14, 1754, Fielding writes in the evening: “As nothing more remarkable past on this day, I will close it with the account of these two characters, as far as a few days residence could inform me of them. If they should appear as new to the reader as they did to me, he will not be displeased at finding them.” He then goes on to describe these persons in detail, their originality justification enough for inclusion.

While Ulysses’ tale was imbued with meaning from interested pagan gods, and the memoirs of European explorers claimed the mercy of an almighty Christian maker, Fielding’s twilight voyage profanely calls upon—as he himself claims—the twin attributes of amusement and utility for future readers. There is shockingly little recognizable spiritual content, and instead he offers helpful tips on where to procure quality cider if you happen to find yourself in Southam.

But there is a revealing episode in which the ship’s intractable and cruel captain—an original character if there ever was one— turns the ship around and uses all hands on deck to save the life of a kitten that has fallen overboard.

We know from the historical record that Captain Richard Veale had recently lost his young wife, and this might now help explain why he went out of his mind when he found the animal dead later, but Fielding gives no explanation when recounting the man’s unearthly cries. Instead, we are given the juxtaposition of the captain’s utter lack of empathy for any living creature with his deranged affection for a single kitten.

The scene reads as gut wrenching and deeply human—true to life because it is unfathomable and inconsistent. Fielding’s enduring greatness as a writer is fully on display here, leaving us to witness the primordial depths of obsession and grief.

It is in his last book published while he was still alive, The Confidence-Man, that Herman Melville shares his thoughts on the novel. Chapter 14 of the book is a manifesto for Melville’s approach to character development, and gives us a foundation for understanding one of literature’s most famously morbid creations, Captain Ahab.

Melville makes a strong and persuasive argument for thoroughgoing irrationalism, noting that ‘no writer has produced such inconsistent characters as nature herself has.” He then makes light of authors who sketch their subjects as if humanity is knowable and built to suit reason. Since none of our lives are “coextensive with what is,” he reminds us, we should not presume total transparency in mapping human nature in our books.

Melville states his position: “Upon the whole, it might rather be thought, that he, who, in view of its inconsistencies, says of human nature the same that, in view of its contrasts, is said of the divine nature, that it is past finding out, thereby evinces a better appreciation of it than he who, by always representing it in a clear light, leaves it to be inferred that he clearly knows all about it.”

To his great disappointment, Henry Fielding survived his voyage to Lisbon. He passed away eight weeks after his arrival, and is buried in the British Cemetery there. His journal was a success when it was published, riding a wave of public interest in the terrible Lisbon earthquake of the same year.

No evidence suggests that Melville read Fielding’s journal, or that Fielding’s sketch of his irrational ship captain later inspired Moby Dick. But because of Melville’s probing interest in the novel form forged by this writer who, even in the face of death, stubbornly observed minutiae in order to plumb the enigmatic depths of human character, we can suspect that he did.

Other Articles by André Darlington