Memoir: ‘My first books were baseball books’ – By George Monteiro

In 1942, for Christmas, I was given Paul Gallop’s book about Lou Gehrig. Its cover and dust jacket were in bright orange, with a picture of the “Pride of the Yankees” on the jacket, along with a picture of the movie-star Gary Cooper, who played Gehrig in the sentimental movie directed by Sam Woods. I wish I still had the original copy of the book, but it went over time the way things go. (I have recently bought a reprint with a dust jacket.) Later I bought with my own money Lucky to be a Yankee, a biography of my favorite baseball hero at the time, Joseph Paul DiMaggio. Both books I read, certainly more than once.

When I was in high school I loaned my DiMaggio book to one of my high school teachers, expecting that, after reading it, he would surely return it. I was wrong. For sometime after I loaned it to him, I was there, for some reason I have forgotten, when he lifted open the door to the truck of his car to fetch something or other, and I saw my book thrown aside into a corner. I said nothing, then, and, sadly, the book was not returned.

I didn’t dare ask for it either. One other book I bought around that time was a biography of the longtime owner and manager of the Philadelphia A’s, the venerable and much venerated Connie Mack. A lot of what I have retained about big league baseball from the earlier decades of the twentieth century are things I remember—snippets—from that book. This morning I thought about what managers did to call in relief pitchers from far-away bullpens in those days, long before anyone even thought, probably, about the use of telephones in dugouts connected to phones in bullpens. I recall that when a manager sent one of his pitchers out from the dugout to warm up, he would give him a new baseball to do so. On one occasion, it didn’t work out that way. The manager could not get his pitcher to come in from the bullpen no matter how he tried to signal him. What he discovered was that his pitcher was not there at all. He had climbed a fence, slipped into the bar across the street and traded the new ball the manager had given him for whiskey.

This reminds me that before the introduction of phones into dugouts and bullpens (and their frugal owner-manager never did introduce phones in Shibe Park dugouts or bullpens, and he managed the A’s for half a century, retiring in 1950 at the age of 87 or so. He had his own way to signal relief pitchers to warm up before coming in from the bullpen, a way that served him well nigh to the end. When he wanted to Joe Coleman to warm up, for example, one of his coaches would step away from the dugout and make an exaggerated shoveling motion as if he were throwing coal up against a wall or down a chute,, but when he wanted Carl Scheib to warm up the coach would stand up and pretend to the punching the wall of Shibe Park itself. 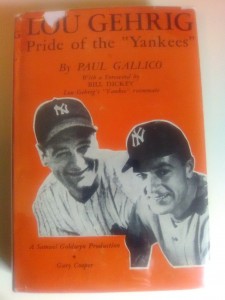 In our salad years baseball was everything to a boy. We re-created in our crude games the Red Sox games we listened to over the radio. Our way of doing this was to bat balls across Titus Street again the chain-link fence enclosing the long green expanse fronting the multi-family house belonging to the Chenaults. Mr. Chenault would show up on occasion, made sure we saw him, scowled a lot but never said a word except don’t climb the fence, walk around and come through the gate when you’re coming for a ball that one of you has hit into my yard.

We knew all the players’ names, but usually not their nationalities. To us they were just baseball players, some better at playing the game than others. To me, an interest in their nationalities or ethnic descent came later, much later. That the outfielder Elmer Valo had been born in Slovakia but had learned to play baseball well enough to play at the Major League level for twenty years was a puzzle to me. Yet that others, besides Valo, could be described as hyphenated Americans never entered my mind. Only much later did I go about trying to discover Portuguese-Americans (if there any or many), who had played the national game well enough to have played in one or the other Major League. I suppose that it started with my discovery that Lew Fonseca was a Portuguese-American from California. Now fast-forward several decades and more—to 2017— for a major discovery in my quest for the names of Portuguese-American Major League ballplayers. Here’ how it went down.

On a recent telecast of a baseball game between the Boston Red Sox and the Baltimore Orioles the color analyst for the New England Sports Network for that game was Dennis Eckersley, the Baseball Hall of Fame pitcher. He questioned, at a given moment, the pronunciation of the Orioles third baseman’s last name, He said that he had always heard the name “Machado” pronounced “Mechado,” which was his mother’s maiden name. Although Dennis himself was born in Oakland, California, his Portuguese mother hailed from Hawaii. His partner in the television booth assured him that the Oriole’s Manny Machado was Spanish and that that accounted for the different way his name was pronounced. What was not said (undoubtedly because it was not known) is that Eckersley pronounced his mother’s maiden name as any Azorean might.

Thus I can now add the name of Dennis Lee Eckersley to my cherished list of Baseball Major League players of Portuguese descent—a member of the Major League Hall of Fame (elected in 2004) the first and only one on my list. Among his accomplishments was winning 197 games won, 390 games saved, a no-hitter, and a 20-win season and (in a different year) a 50-save season.

(Surely there are other Major League baseball players of Portuguese descent, especially from California, I would imagine, than appear on this list)
——————–