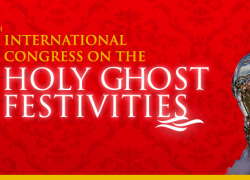 The 5th International Congress on the Holy Ghost Festivities, sponsored by the Government of the Azores, will take place in Angra do Heroísmo, Terceira island, from May 31 to June 3.

The congress will gather international scholars and researchers interested in the study of this religious tradition deeply rooted in the Azorean culture.

Participants from the Azorean communities in the United States, Canada, Bermuda, Hawaii, Brazil, Uruguay and mainland Portugal are expected to attend.

The Holy Ghost Festivities  are the religious tradition that better differentiates the Azorean people and their descendants wherever they are. This tradition has crossed borders through emigration and is celebrated in all the Azorean communities around the world.

The tradition, which originated in 12th century Europe, came to the Azores in the 16th century with the first settlers. The festival is held each year at Pentecost, fifty days after Easter and runs for eight weeks until Pentecost and Trinity Sunday. Its traditional iconography is symbolized by a crown and a dove.