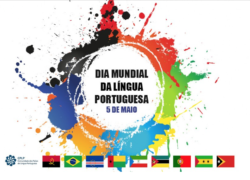 The World Portuguese Language Day is being celebrated on May 5th in about 50 countries, with cultural activities worldwide.

In the United States, May 5th will be officially celebrated in New York, in a joint initiative between Portugal and Brazil.

The event will take place at the Manhattan facilities of the Consulate General of Brazil, with the participation of representatives of all Portuguese-speaking African countries.

With more than 260 million speakers worldwide, Portuguese ranks fifth among world languages in number of native speakers, distributed in all continents.

The United States is home to about 1.3 million people of Portuguese heritage, with and estimated 693,000 native speakers of Portuguese. In New England, Portuguese is the third most widely spoken language after English and Spanish.

Portuguese is also the fifth most used language on the Internet and is the fourth most used on Facebook.

Brazil, which has a population of over 207 million, is the largest Portuguese-speaking nation. Portuguese is also spoken in the territory of Macau in China. Someone who speaks Portuguese is called a Lusophone.

The date of May 5th was officially established in 2009 as ‘World Portuguese Language Day’ by the Community of Portuguese Language Countries (CPLP) – an intergovernmental organization that has been in official partnership with UNESCO since 2000, and brings together peoples with the Portuguese language as one of the foundations of their specific identity – to celebrate the Portuguese language and Lusophone cultures, with the mission of bringing together the communities and countries around the world where Portuguese is spoken.

In 2019, the 40th session of UNESCO’s General Conference officially proclaimed May 5th, of each year, as “World Portuguese Language Day” as a major language of international communication, as well as a global language of science, culture, economics, and diplomacy,

As part of the celebrations of World Portuguese Language Day 2022,  Portugal’s School Libraries Network will affirm the Portuguese language as a global platform for learning and understanding between students and schools from different regions, countries and cultures where Portuguese is spoken and taught.

The Portuguese School Libraries Network (Rede de Libraries Escolares) was launched in 1996 by the Ministries of Education and Culture with the aim of creating libraries in all public schools at every level.