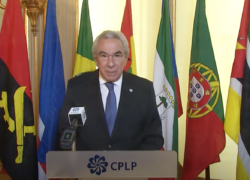 The Lusophone world is celebrating May 5th as the international day of the Portuguese language and culture.

Portugal was represented at the ceremony by a delegation that included Prime Minister António Costa, Minister of Culture, Graça Fonseca, Secretary of State for the Portuguese Communities, Berta Nunes, and Portugal’s Ambassador to UNESCO, António Sampaio da Nóvoa.

Congratulating the accomplishment, the President of Portugal, Marcelo Rebelo de Sousa, remarked, “I am very happy, I followed the process,” he told journalists in Lisbon.

“It is the recognition of a great language in the world, one of the greatest languages ​​in the world, of which we Portuguese are proud as is everyone else who speaks the language,” he said.

The proposal to proclaim May 5th as “World Portuguese Language Day” was first presented in October 2019, at 40th session of UNESCO’s General Conference, by all 8 Portuguese-speaking which form the CPLP. On November 12, 2019, the proposal was supported unanimously by 24 additional countries.

Created in 1996, the CPLP represents the community of nations where Portuguese if the official language (265 million) including Portugal, Brazil, Angola, Cape Verde, Guinea-Bissau, Mozambique, São Tomé and Príncipe and East Timor.

The CPLP is an inter-governmental organization in partnership with UNESCO since 2000. The organization brings together the nations where the Portuguese language is one of the foundations of their national identity.

The UNESCO (United Nations Educational, Scientific and Cultural Organization) is a specialized agency of the United Nations (UN) aimed at contributing “to the building of peace, the eradication of poverty, sustainable development and intercultural dialogue through education, the sciences, culture, communication and information.”

The Portuguese language is one of the most widespread languages in the world, spoken through all continents, as a major language for international communication and commerce.

The language of the first wave of globalization, Portuguese the third most widely spoken European language, after English and Spanish. More people around the world speak Portuguese as their native language than French, German, Italian or Japanese.