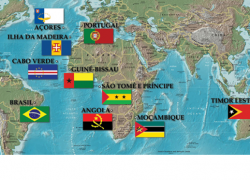 The Lusophone world is celebrating today the International Day of the Portuguese Language and Culture. The celebrations, which were first held in May 5, 2013, will take place in about five dozen countries.

The initiative was launched by the Community of Portuguese Language Countries (CPLP) during the 14th CPLP Council of Ministers meeting, in Cape Verde, in June of 2009, when it was agreed to dedicate May 5th to celebrating the common linguistic and cultural ties which unite the eight countries that belong to the CPLP.

Created in 1996, CPLP represents the community of nations where Portuguese if the official language, an estimated 280 million people, including Portugal, Brazil, Angola, Cape Verde, Guinea-Bissau, Mozambique, São Tomé and Príncipe and East Timor.

About the Portuguese Language >>Wikipedia>>