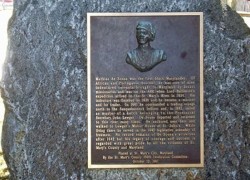 In the early 16th century,  Azorean born Miguel Corte-Real may have been the first Portuguese to set foot on American soil, while Portuguese explorer João Rodrigues Cabrilho may be credited with leading the first European expedition to California in 1542. Still, the first known Portuguese immigrant on record, to have settled in North America, may have been Mathias de Sousa.(*)

Records place Mathias de Sousa in Maryland, in 1635, among the very first original settlers in the Colony. Details about him are scarce, but facts about his life in the Maryland Colony indicate that he was a Portuguese national of mixed African and European descent (Loker, 2008, p. 48).

Facts also place him arriving there onboard of the Ark, under the sponsorship of Father Andrew White, an English born Jesuit priest (Loker, 2008, p.48).

Mathias de Sousa entered Maryland as an indentured servant.  Indentured servants were, for the most part, young men who came to colonial America to work as unskilled contracted laborers for an extended period of time — three to seven years — in exchange for passage and other necessities.

He must have been young and ambitious. Soon after completing his indenture requisite in 1638, he became an entrepreneur and politician. He had navigation skills, managed a prosperous trade in furs with Native Americans and soon became a respected member of the community (Heywood & Thomton, 2007, p. 284).

He is on record as having been the first African American to cast a vote in colonial Maryland and in the land which would become the United States.  He remains the first known African American and the first person of Portuguese ancestry  to have voted in America.

Soon after, in 1642, he served in the Maryland General Assembly, the Colony’s lawmaking body, where he was listed alongside the other assembly members, and became a distinguished Maryland citizen (Heywood & Thomton, 2007, p. 285).

A monument to Mathias de Sousa, placed under a mulberry tree on the bank of St. Mary’s River, in Maryland, has the following inscription:

“Mathias the Sousa was the first Black Marylander. Of African and Portuguese descent, he was one of the nine  indentured servants brought to Maryland by Jesuit missionaries and was on the ARK when Lord Baltimore’s expedition arrived in the St. Mary’s River in 1634.”

Apparently, Mathias de Sousa must have had a reversal of fortune in his later years as, reportedly, he became an indentured servant again.

In 1642, after court proceedings, Mathias the Sousa lost his freedom to John Lewger over a debt. He then was sued by John Hollis for a debt of 500 pounds of tobacco. For that, the sheriff ordered to seize the “person of  Mathias de Sousa”  ( Russell & Russell, 2009, p.239).  At that point, his name disappears from the Maryland  records. Unfortunately there is no record of how he ended his days (Loker, 2008, pp. 48-49).

As for Father Andrew White, Mathias de Sousa’s sponsor to Maryland, he also had his own share of bad luck.  After conducting missionary work among the Native Americans, for which he learned the language and compiled a dictionary and book of grammar, in 1644 he was captured by contrary Protestant dogmatists and brought back to England in chains (Ahlstrom & Hall, 2004, p.338).

Father Andrew White’s manuscript, Brief Relation of the Voyage unto Maryland, still stands today as the most detailed account of the Ark expedition that brought Mathias de Sousa forth to the American Dream.

is the founder and editor of the Portuguese American Journal online. She was the editor–in-chief of The Portuguese American Journal, in print, from 1985 to 1995. From 1995 to 2010, she was a consultant for Lisbon based Luso-American Development Foundation (FLAD). She graduated with a Bachelor’s Degree in Liberal Arts and a Master’s Degree in English and Education from Brown University and holds a Doctorate in Education from Lesley University. She was an adjunct professor at Lesley University, where she has taught undergraduate and graduate courses. In 2004, Carolina Matos was honored with the Comenda da Ordem do Infante D. Henrique, presented by Jorge Sampaio, President of Portugal.