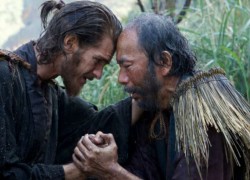 Premiered in Vatican City on November 29, with the participation of Pope Francis, the film will be released in selected theaters in the United States on December 23, and nationwide starting January 6, 2017. Screenings in Portugal are scheduled to start  January 19, 2017.

The story is an adaptation of the novel with the same title by Japanese author Shūsaku Endō (1923-1996). It begins in Portugal with two young Portuguese Jesuit priests, Father Sebastião Rodrigues (Andrew Garfield) and Father Francisco Garupe (Adam Driver), traveling to feudal Japan.

In the film, Father Rodrigues and Father Garupe smuggle themselves into Japan to locate their mentor, the missing Father Ferreira (Liam Neeson), who had renounced his religious beliefs to spare his own life after being tortured.

According to the film’s description from Paramount Pictures, the two young Portuguese Jesuit priests must come to terms with their own human frailty and a deeper understanding of God’s love and grace in the midst of God’s “silence.”

In the year 1543, the Portuguese traders António da Mota and Francisco Zeimoto were the first Europeans to reach Japan. and the Portuguese Jesuit missionary Francis Xavier brought Catholicism to Japan in 1549. 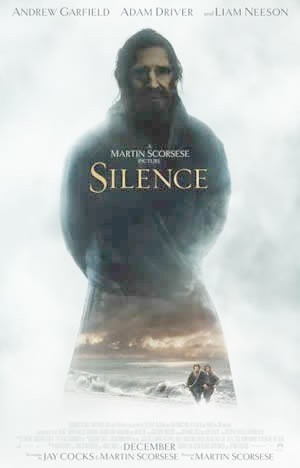 While in Japan, Jesuit missionaries faced violence and persecution under direct orders from Japanese rulers determined to eradicate Christianity from the country. They targeted Christian converts with persecution, torture and execution forcing them into hiding.

The story takes place in the time of Kakure Kirishitan (“Hidden Christians”) that followed the defeat of the Shimabara Rebellion (1637–38) of Japanese Roman Catholics against the Tokugawa rule.

Portuguese trade with Japan prospered until 1641, when Christianity was finally banned from the country and Portuguese traders were replaced by the Dutch.

The film project started in in 1988, when devout Catholic Martin Scorsese  was given a gift of Silence (1966), the award-winning novel by Shūsaku Endō, one of the most celebrated and well-known Japanese fiction writers of the twentieth century.

With Paramount Pictures, the picture was shot entirely in Taipei, Taiwan, from January 30 to May 15, 2015. Find cast and production details @ IMDb.com