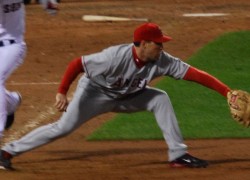 The donation will go toward a $90 million fund to develop a 50,000 square-foot project that includes a permanent home for the Harlem RBI’s DreamCharter School, a community center, 87 units of low-income housing and the upgrading of a city park.

The launching of the project will be announced early next month with New York City Mayor Michael Bloomberg, according to Richard Berlin, executive director of Harlem RBI.

Harlem RBI is an academic and baseball/softball program for 1,000 East Harlem — boys and girls ages 5 to 21 — which  prepares students for acceptance into college. The Dream Charter School, opened in 2008, and currently shares space with Harlem public school.

In 2006 Mark and his wife Leigh Williams established the Mark Teixeira Charitable Fund that supported six $5,000 scholarships at three high schools in the Dallas/Fort Worth area. They have three children, sons Jack Gordan and William Charles, and daughter Addison Leigh.

Mark Teixeira is a Portuguese American with roots in the South American country of British Guiana (now Guyana) the country from which his grandfather migrated as a young man.