Mário Soares warns of danger of revolution in Europe – Interview 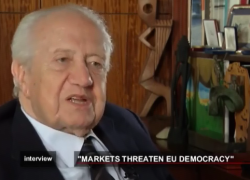 Former President of Portugal, Mário Soares, one of the principal craftsmen of the adhesion of Portugal to the European Economic Community in 1985, said in a recent interview for EuroNews that he believes the European Union is in crises because the markets are disoriented and the dominance of economics and business is a tragedy for any country. He also warned of danger of revolution in Europe.

He said “The markets are disoriented, as are those that govern them.” He also remarked that a rich country like Germany may be thinking  “to Germanise Europe,” and that “ Mrs. Merkel acts like the boss of Europe, but she is not.”

“There is a relationship with neo-liberalism and the idea that money and business rules the world. This concept was born in the US. Thankfully this is no longer the case, President Obama wants change, a new model of economic development, but now people are beginning to realise that if we carry on like this Europe will have no future in the world. It will be a kind of unhappy appendage of Asia” – said Mário Soares.

The former President of Portugal blamed the rating agencies for creating the current financial crises in Portugal and other peripheral EU countries. He said, “The ratings agencies are illegal, they make no sense, they have no sense of responsibility. How can they judge member states: with what right, with what authority? Where do they come from, who do they serve? We need to change all that.”

Mário Soares warned that the current situation is not sustainable and can lead to civil unrest in Europe. He said, “The reaction will come from the people. It is not just in the Arab world that people revolt. The danger is revolution in Europe. Individuals can reject this Europe and say this is not Europe, we want another. We want dialogue, social welfare and respect for each other.”

One of the founders of Portugal’s Socialist Party, Mário Soares served as Portugal’s Prime Minister from 1976 to 1978 and from 1983 to 1985. He was the 1st President of Portugal to be elected democratically in 1986. One of the most respected personalities of modern Portugal, he served two terms as President from 1986 to 1996.