Maria João Pires not to retire in 2014 – People 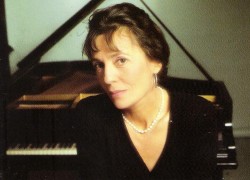 Portuguese piano virtuoso Maria João Pires said she is planning to retire in 2014 when she turns 70. She told Spanish newspaper El País she felt tired and that she intends to stop giving concerts. She said, “I and my agent have set a date: 2014, which is when I turn 70.”

In 2010, she had told The London Evening Standard she was not ready to retire anytime soon. She said, “I never said I will retire,” and she said, “I said I wish I could retire, which is a different thing. I’ve played enough. I’ve played for 60 years, and I think it’s too much. I have the same enthusiasm for music as I had many years ago” — and she added — “Of course, it has changed but it’s still there. I don’t enjoy being on stage — I never have — but it’s one thing not to enjoy it, another not to cope with it. I don’t cope well now. Once I start playing, it’s the same as before, but afterwards I feel much more tired because it is so demanding — not physically, but psychologically.”

In her recent interview for the Spanish newspaper, Maria João Pires said she wants to leave the stage to dedicate more time to her educational projects in her native Portugal. Her focus is to help underprivileged and abused children through involvement with music.

Considered one of the greatest piano concert performers in the world, Maria João Pires was born in Lisbon in 1944. Her first recital was at the age of five, and at the age of seven she was already playing Mozart Piano Concertos publicly. International fame came in 1970, when she won the Beethoven Bicentennial Competition in Brussels.

She has since then regularly performed with major orchestras throughout the world, interpreting works by Bach, Beethoven, Schumann, Schubert, Mozart, Brahms, Chopin and many other classical and romantic composers. She appears regularly with major world orchestras in Europe, America, Canada, Israel and Japan.