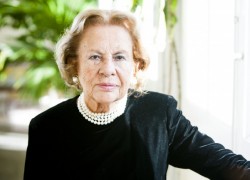 Maria Barroso died in Lisbon’s Red Cross Hospital, following an injury from a fall at home 10 days ago. She was survived by her husband, two children and several grandchildren.

A former actress, Maria Barroso was Portugal’s First Lady when Mário Soares served as the 17th President of Portugal from 1986 to 1996.

The couple met at Lisbon University in the 1940s. Together they opposed the Salazar dictatorship that governed Portugal from 1932 to 1968. After multiple arrests for political activism Mário Soares married Maria Barroso in prison before both were sent into exile.

An educator, social activist and politician, Barroso was a co-founder with her husband of the Portuguese Socialist Party in 1973.

After democracy was introduced in 1974, Barroso became a lawmaker while her husband served as Foreign Minister, Prime Minister and President. She was elected member of the Portuguese Assembly in 1976, 1979, 1980 and 1983.

Maria de Jesus Simões Barroso Soares held a degree in Historical and Philosophical Sciences from the Faculty of Arts, Lisbon and the course of Dramatic Arts from the National Conservatory. She was the President of the Aristides Sousa Mendes Foundation, the Pro Dignitate Association and the head of the Portuguese Red Cross for several years. Maria Barroso visited the Portuguese community of New England in 1993 and again in 1994.