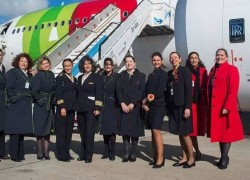 “For the first time in the history of world aviation, the model of the Airbus A330neo was operated by an exclusively female crew. Flight TP089 took off at 10h45 Lisbon, bound for São Paulo,” said the carrier’s statement.

As part of the celebration of International Women’s Day, the TAP Miles & Go program also launched a promotion dedicated to all women offering double miles.

In North America, TAP Portugal operates in the United States, in a tie-up service with JetBlue, offering flights from its Lisbon hub to New York, Boston, Miami and Newark. The partnership with JetBlue allows both airlines to sell connecting seats on each other’s flights.  In Canada, in June of last year, the carrier brought back its operation to Toronto for the first time since 1994.

Anne McClain and Christina Koch will venture out together about 240 miles (400 kilometers) above Earth and make history.

“It was not orchestrated to be this way,” said NASA spokeswoman Stephanie Schierholz. “These spacewalks were originally scheduled to take place in the fall — they are to upgrade batteries on the space station.”

Both McClain and Koch were members of NASA’s 2013 astronaut class, half of which was made up of women.