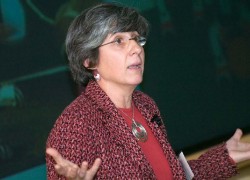 The Chinese Academy of Sciences has named Manuela Veloso, the Herbert A. Simon Professor of Computer Science at Carnegie Mellon University, as an Einstein Chair Professor for 2012. She is one of 20 prominent international scientists so honored.

As an Einstein Chair Professor, Veloso will present a lecture at the University of Science and Technology of China, a national research university in Hefei, China, and at another Chinese university.

Veloso, who this summer will become president of the Association for the Advancement of Artificial Intelligence (AAAI), is the only AI and robotics researcher among this year’s Einstein Chair Professors. Her lectures will focus on symbiotic autonomy, a concept she is pioneering in which robots are aware of their perceptual, physical, and reasoning limitations and proactively ask for help from humans.

Symbiotic autonomy is employed by several robots, called CoBots, that her research group has deployed on the Carnegie Mellon campus. The CoBots can navigate on their own through hallways while delivering or fetching messages and packages, but must ask people for help when confused or for performing manipulation tasks such as opening doors or pushing elevator buttons.

Veloso is well known for her work on robot soccer, which is an important research tool for studying how autonomous agents can work cooperatively in complex, uncertain environments. She is past president of the International RoboCup Federation, which sponsors annual world championships in robot soccer.

Veloso is a Fellow of the IEEE, AAAI and the American Association for the Advancement of Science (AAAS). She is a recipient of the Autonomous Agents Research Award from the Association for Computing Machinery’s Special Interest Group on Artificial Intelligence, as well as a National Science Foundation Career Award and the university’s Allen Newell Medal for Excellence in Research.

Born in Portugal, Manuela Veloso did her undergraduate studies at the Instituto Superior Técnico, in Lisbon, before attending Boston University where she received a Masters in Computer Science. She received her doctor’s degree in computer science from Carnegie Mellon in 1992.

Via The Robotics Institute at Carnegie Mellon University