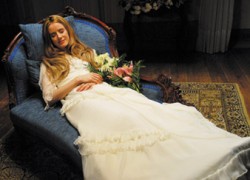 The film “Strange Case of Angelica,” by Portuguese director  Manoel Oliveira will be featured at the new edition of the 49th New York Film Festival, set to open September 24 to October 10, 2011, at the Film Society of Lincoln Center.

Portuguese film “Mysteries of Lisbon,” directed by Raul Ruiz, based on the 19th-centry Portuguese novel by Camilo Castelo Branco, will also be featured at the festival.

“The Strange Case of Angelica (O Estranho Caso de Angélica)” was completed in 2010 after Oliveira’s 101st birthday.  This most recent feature tells the story of young and beautiful Angelica (Pilar López de Ayala) who dies but not before young photographer (Ricardo Trêpa, Oliveira’s grandson) is summoned to take her final picture.  Angelica magically comes to life, but only when the photographer looks at her through his viewfinder.

Director Manoel de Oliveira, 102 years old, is the only filmmaker working today who made his first movie in the silent-cinema era.