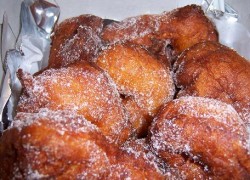 To celebrate Fat Tuesday March 8, once again a group of Portuguese-American women from the Hawaii Council on Portuguese Heritage, Honolulu, brought back the great Portuguese food tradition from the Azores and Madeira islands, the making of malassadas.

According to the local press, the event was a success. People came in to feast and more than 300 malassadas were sold while cars were lined up all around the parking lot, and even stretched out to the street, to get to the golden Portuguese fried dough.

The Hawaii Council on Portuguese Heritage was founded in 1977 to preserve and perpetuate the heritage and culture of the Portuguese people in Hawaii.