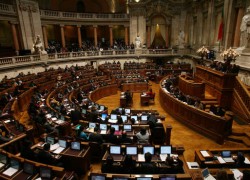 A government proposal for the 2012 budget was approved in Parliament Friday, on a first reading, with votes from the center-right PSD/CDS-PP majority governing coalition.

The Socialists (PS), ousted from power last June, abstained, while the extreme left (PCP, BE and ENP) voted against.

The approved proposal will be discussed for the next two weeks. A first round of vote is scheduled for November 28 and 29, followed by a final vote on November 30.

The budget proposed reflects the austerity measures imposed last May by the 78 billion-euro financial loan negotiated with Brussels and the International Monetary Fund, aimed at slashing Portugal’s deficit to 4.6% next year.

The government estimates that the proposed budget will see the economy shrink 2.8 per cent in 2012 while the European Union puts the downturn at 3.0%, the worst Eurozone performance.

Transportation public workers have been staging strikes nationwide, for the past week, in protest against the proposed measures which include cuts in salaries and layoffs.

A general strike has been scheduled for November 24, after the two largest Portuguese union federations agreed in October to stage a national shutdown in protest against the austerity measures being proposed.