The Queen Victoria underway to Portas do Mar – Azores 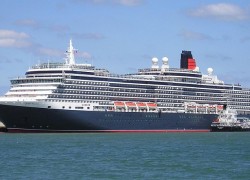 British luxury liner Queen Victoria — with nearly 3,000 passengers and crew  on board (1,912 passengers and 970 crew members) — is under way en route from Nassau to Ponta Delgada in the Azores.

The cruise liner left Fort Lauderdale, FL (Port Everglades) on March 29, on her 16 days cruise, stopping at the Bahamas ports of Nassau and Hamilton before arriving at Ponta Delgada on April 6, at 8 am local time.

Passengers will enjoy a one day stay on the island before departing for Lisbon at the end day.  From Lisbon they will sail to Cobh, Ireland, Le Havre, France and Southampton, United Kingdom.

Queen Victoria features a three-tier grand lobby, ornate marble staircases and a 6,000 title library.  The 964ft long vessel entered service for the Cunard cruise company in 2007. She was named by Camilla Duchess of Cornwall in December 2007.

“Portas do Mar” in Ponta Delgada won in 2008 third place at the “Sea trade Insider Cruise Awards” as one of the best cruise liners  destinations  by the European Convention of Cruise Liners.