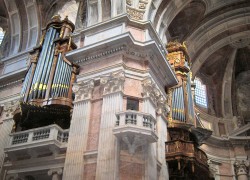 The six historic organs in the Basilica of the Palace of Mafra, Portugal, were among the 28 winners of the 2012 European Union Prize for Cultural Heritage by the European Commission and Europa Nostra under the conservation category.

The restoration work of the 19th century organs, by Portuguese expert Dinarte Machado, took nearly a decade to complete. After being silent for about 200 years, the six organs were heard again May 2011.

In a statement by the European Commission and Europa Nostra, the six organs in the Basilica of the Palace of Mafra were considered unique and the restoration work was recognized as a most outstanding achievement.

“The jury was impressed by the restoration of this unique ensemble of majestic organs entrusted to organ builder Dinarte Machado closely followed by a scientific committee. This project has resulted not only in the restoration of the organs but also in the provision of an example for future generations of the perfect integration of moveable items into immovable architecture. It gives a real sense of coherence, enriched in this case by the harmony between the material and non-material aspects of heritage,” the statement said.

The restoration process was followed from the beginning by an International Scientific Committee of organ experts to guarantee the rigor, quality and reversibility of all the interventions. The work was fully documented for the benefit of future generations.

The awards will be presented on 1 June during a ceremony at the Jerónimos Monastery in Lisbon in the presence of Androulla Vassiliou, European Commissioner for Education, Culture, Multilingualism and Youth, and Plácido Domingo, the world-renowned tenor and President of Europa Nostra. The event is taking place under the patronage of Aníbal Cavaco Silva, President of Portugal, who will also be present, and José Manuel Durão Barroso, President of the Commission.

Mafra Palace is undergoing a restoration project with the goal of being listed as a UNESCO World Heritage Site. The historic site has been under consideration by UNESCO for some years while further preservation work is being accomplished.

The 17th century Portuguese Synagogue Complex, in Amsterdam, the Netherlands, was also awarded under the conservation category.