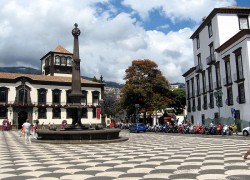 The President of the Regional Government of Madeira, Alberto João Jardim, announced that the reconstruction work underway, following the storm of February 20, 2010, is estimated to cost over 100 million-euros ($145 USD million).

The President made the announcement during his recent visit to the affected areas. The storm affected mainly the district of Funchal, Ribeira Brava, Ponta do Sol and Santa Cruz, causing heavy losses in several infrastructure and public facilities.

At the time, the government acted swiftly by activating various governmental resources to restored the most affected areas, returning them to normal operation in record time.

The 2010 floods swept everything in their path — people, cars, homes, and business — killing 42 people and injuring over 100.

Considered Madeira’s worst catastrophe of the last 100 years, the heavy storms brought a violent downpour and 120km-per-hour (about 74 miles-per-hour) winds, flooding the entire city of Funchal.

The amount of rainfall that fell in one day exceeded the monthly average. Many roads in Madeira were partially destroyed or blocked with rocks, trees and mud.

The floods uprooted trees, washed away bridges and roads, damaged or destroyed many homes and smashed dozens of cars on the island.