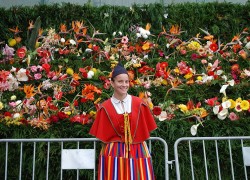 The 2011 Madeira Flower Festival will take place May 7-8, in Funchal, the main city on the island.
The event comprises of parades through the streets of Funchal in festive costumes, artistic flower carpets, and music and flower exhibitions.

A new tradition was added in recent years — the ‘Wall of Hope’ – with the participation of children and doves being released representing the hope for a better peaceful world.

The various communities of Madeira — villages and towns — are represented in the festival one of the most important events on the island.

The Festival originated in the late 1950’s and attracts thousands of locals and tourists every year.
The Madeira archipelago is situated off the coast of North Africa. It is the second richest Portuguese region after Lisbon and boasts a per capita GDP higher than the EU average.