Madeira elections will be investigated for irregularities – Lisbon 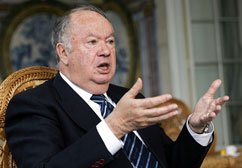 The president of the Portuguese National Elections Commission (CNE), Fernando Costa Soares, said Tuesday it would investigate alleged cases of illegal transport of voters during Sunday’s ballot in the Atlantic archipelago of Madeira and if there were any signs of criminal activity, they would be investigated by the Public Prosecutor’s office, Lusa news reported.

The CNE said it had contacted local police forces as it had been forewarned of certain dubious activities, but the police found no illegal transport of voters during the day.

The CNE received about 30 complaints during ballot day regarding voters from the majority party (PSD-M) being taken to the polling stations in vans belonging to the regional power utility company and local politicians’ presence close to ballot boxes.

The CNE representative for Madeira, Paulo Barreto, announced his resignation immediately following the elections, claiming he was “disgusted” with repeated irregularities that went unpunished every time.

Jardim had also been accused by the opposition for his total disrespect for the rules of democracy, for his contempt for his political adversaries and his tampering with the election process, enabling those in power in Madeira to act with absence of civility, ethics and responsibility.

Following his victory Sunday, with an absolute majority of 48,56%, a defiant Jardim said that it was strange that there was a National Elections Commission, “whose only job was to spend the taxpayers money,” adding that “the opinion of the (CNE) is worth nothing in my books.”

Madeira (population 253,000) became an autonomous region of Portugal in 1976 with its own government and autonomous legislature. The Regional Government includes the Legislative Assembly composed of 47 deputies, elected by universal suffrage for a four-year term; the Regional Government and Presidency, with parliamentary legitimacy, composed of a President, a Vice-President and seven Regional Secretaries, responsible for day-to-day executive operations.

The Autonomous Region of Madeira, composed of Madeira and Porto Santo islands, is represented in the Council of Ministers of the Central Government by a representative appointed by the President of Portugal.