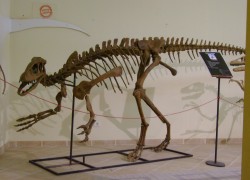 The Portuguese town of Lourinhã, known for its dinosaur fossils dating back 150 million years, is opening the world’s biggest Jurassic park in the spring of 2013, town councilor Vital do Rosário revealed to the press Wednesday.

According to the announcement, the town council of Lourinhã has signed an agreement last week with private partners in Germany, responsible for drawing and managing the project, connected with Dinopark near Hannover.

“It’s incredible to participate in building the largest dinosaur park in the world. We are really excited because Lourinhã is the site of many incredible discoveries,” said Franz-Josef Dickmann from the German team.

Work to complete the project is scheduled to start next July, at an estimate total cost of 10 million euro, 95 percent  being financed with funds from the European Union. The total project, which includes the renovation of nearby beaches and parks and the construction of hotel units, will be completed by 2020

The Museu da Lourinhã, established in 1984, is the current home of the fossil collection from the Upper Jurassic considered the largest and one of the most important in the world. The museum receives 16,000 visitors a year including scientists from all over the world.

Among these 150 million year old fossils there are various remains of carnivorous dinosaurs such as the Lourinhanosaurus antunesi, of gigantic herbivores like the Dinheirosaurus lourinhanensis and various carnivorous dinosaur fossil eggs containing the oldest dinosaur embryo eggs in the world, as well as the second largest known Dinsour nest in the world.

The ancient town of Lourinhã (population 23,000) is located on the west cost of Portugal about 60 km north of Lisbon. The name Lourinhã has been associated with the Roman settlement in  the Iberian Peninsula occurred in 219 BC.