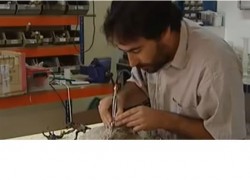 A rare dinosaur skeleton and one of the oldest in the world has been discovered in the south of Lourinhã, Portugal, about 70 km north of Lisbon.

Identified by Portuguese paleontologist Octávio Mateus, the remains under study appear to be of a coelurosaur, a rare relatively small carnivorous dinosaur, less than two meters long, from 150 million years ago.

“It is certainly the most complete dinosaur we have in Portugal and one of the most complete from the Upper Jurassic in the whole world. This means that we can now better study how dinosaurs have evolved and how they turned into birds,” said Mateus, a researcher at the Universidade Nova de Lisboa associated with the in the Jurassic Museum of Lourinhã.

According to Mateus, it is uncommon to find such a complete coelurosaurs skeleton “So this is the first complete articulated coelurosaur found,” he said.

Portugal is very productive in Late Jurassic vertebrates, being the seventh country in the world with more dinosaur remains.

The paleontological collections of the Museum of Lourinhã has a rich paleontological collection, particularly of Late Jurassic dinosaurs known as the “Lourinhã Formation” (Kimmeridgian-Tithonian) which include specimens such as the stegosaur Miragaia longicollum, theropod Lourinhanosaurus antunesi, sauropod Dinheirosauruslourinhanensis, ornithopod Draconyx loureiroi, theropod Allosaurus europaeus, and, a mammal, Kuehneodon hahni. Other relevant dinosaur specimens at the musueum include nest and eggs and embryos of Lourinhanosaurus. Portugal is very productive in Late Jurassic.