Lorenzo: Monster storm to loom over the islands on Wednesday – Azores 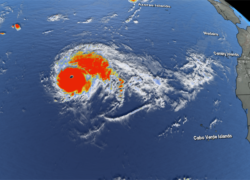 The Azores islands are calmly preparing to face hurricane Lorenzo approaching land with high winds, torrential rain and sea swells. It tis he strongest storm ever observed so far over the north and east Atlantic.

At its highest peak, Lorenzo was a Category 5 on Saturday, with maximum sustained winds of 105 mph (165 kph) on Monday.  Since then, the monster storm has weakened to Category 1, expected to impact on the islands on Wednesday. 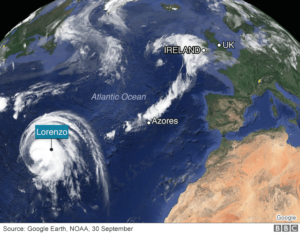 “Lorenzo is expected to produce total rain accumulations of 3 to 6 inches over much of the western Azores and 1 to 2 inches over the central Azores on Tuesday and Wednesday. This rainfall could cause life-threatening flash flooding in the western Azores,” the U.S. National Hurricane Center has warned.

The storm is likely to cause life-threatening surf and rip current conditions. An official storm warning was issued on Tuesday for all the islands.

Forecasters have warned of heavy rains and life-threatening flash flooding. Ports, schools and non-emergency public services will be closed on Wednesday.

After it passes the Azores, the storm will still be a powerful squall with high winds and heavy rain heading to the United Kingdom later this week.

This story is developing and will be updated.