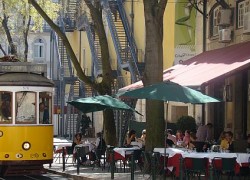 Lisbon was voted second place in the top 10 must-visit cities in 2012 by the readers of Lonely Planet travel guide.

The Portuguese capital has won 15% of the vote, surpassing cities such as Barcelona, London and Berlin. The winning city was Reykjavik, in Iceland, with 27% of the vote. Participants were asked to select destinations they feel are the hot picks for the following year and explain why.

Lisbon is “A city of contrasts, where is possible to experience unique feelings, suitable to everyone’s expectations,” they said.

Lisbon (population 545,245) is the capital of Portugal, its largest city and the 9th most populous urban area in the European Union. Lisbon is one of the oldest cities in the world, predating other modern European capitals such as London, Paris and Rome by hundreds of years. Lisbon has two sites listed by UNESCO as a World Heritage Site: Belém Tower and Jerónimos Monastery.