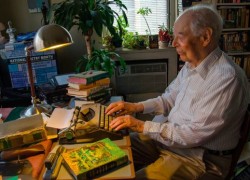 “He’s the godfather of us all,” Edith Grossman, the acclaimed translator of Don Quixote and several García Márquez books, told The Associated Press on Tuesday. “He’s the one who introduced Latin-American literature in a serious way to the English speaking world,” he said.

Rabassa was the recipient of many distinctions and awards including the ‘PEN Translation Prize’ (1977) and the ‘PEN/Ralph Manheim Medal for Translation’ (1982). In 2001, Rabassa was honored with the ‘Gregory Kolovakos Award’ from PEN American Center and received the ‘National Medal of Arts’ in 2006.

His memoir, If This Be Treason: Translation and Its Dyscontents, reflecting his experiences as a translator, was named by the Los Angeles Times ‘Favorite Book of the Year’ (2005) and received the ‘PEN/Martha Albrand Award for the Art of the Memoir'(2006).

Gregory Rabassa was born in Yonkers, New York, of Cuban and Scottish heritage. He taught for many years at Columbia University and Queens College. Survivors include his second wife, Clementine; daughters Kate Rabassa Wallen and Clara Rabassa, and granddaughters Jennifer Wallen and Sarah Wallen.