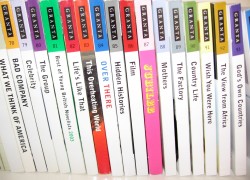 A Portuguese-language edition of the British literary magazine Granta is to be published from next spring, according to the Lisbon publishing house that is to produce it, the Portuguese news agency Lusa reported.

“The magazine may be annual, half-yearly or quarterly, but we thought that in Portugal it should be half-yearly, not least because this is a fairly ambitious project and we want the time to work on the texts,” Bárbara Bulhosa, the head of Tinta-da-China told Lusa. “This is a heavyweight magazine.”

She said half the content of the publication is to come from Granta‘s own archives, including recent texts, although the Portuguese edition will have “complete autonomy”. The rest will be works by Portuguese authors on the issue’s chosen theme.

The magazine’s editor, veteran journalist and broadcaster Carlos Vaz Marques, is already working on the theme for the first edition, Bulhosa said, though she did not reveal it.

Granta‘s British editor, John Freeman, is to come to Portugal for the launch, next May.

The magazine was first published in 1889, as The Granta, by students at University of Cambridge. After its re-launch in 1979, shorn of the definite article, it became known for publishing texts by established and rising literary stars such as Martin Amis, Bruce Chatwin, Doris Lessing, Ian McEwan, Salman Rushdie and Paul Theroux.

This year saw the publication in Brazil of a special edition devoted to the 20 best Brazilian novelists under 40. This youthful slant is likely to be a feature of the Portuguese edition, according to Bulhosa.