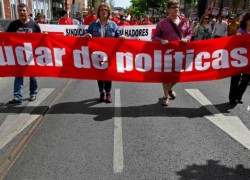 The new leader of CGTP, Portugal’s largest labor organization, said Friday that the national demonstration planned for Saturday, February 11, to protest the center-right government’s bailout austerity policies, will be one of “the largest ever.”

“The demonstration against inequality and poverty will generate a great mobilization against the government’s policies”, said Arménio Carlos to Lusa. “The atmosphere is good, the information we have clearly points to this being one of the biggest demonstrations ever in Portugal”, he added.

Tens of thousands of demonstrators from across the country are expected to concentrate at three points in the capital Saturday and march to the Tagus riverside Praça do Comércio square where a rally will take place.

Carlos, who replaced Carvalho da Silva as the leader of CGTP, said he hoped the Saturday demonstration, in Lisbon’s main square Praça do Comércio, also would serve to “bring hope to workers that their struggle will propel the changes needed in the country.”

Last month, unlike UGT, the CGTP has since abandoned talks with the government and those employers who have agreed to implement the belt-tightening changes to labor laws.