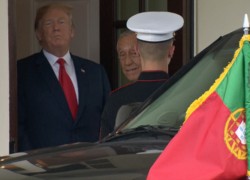 Diplomats in Washington and Lisbon have been planning a one-day visit of President Donald Trump to Portugal in the near future.

If confirmed the visit would take place “towards the end of August” when President Trump is scheduled to visit Spain, at the invitation of King Philip VI.

Reports from the media, yet to be confirmed, suggest President Trump will either be in Lisbon on his way to Spain, or on the way back.

“I invited him, in a clear and formal way during the time of the armistice, on 11 November in Paris,” Marcelo Rebelo de Sousa told reporters, but “nothing as yet has been confirmed.”

He reiterated that the President of the United States “said at the time he was very interested and available to visit Portugal.”

In spite of the media speculation, a US Embassy source, cited by the Espresso newspaper, has restated that a visit by President Trump to Portugal at this time is not being planned. However the Espresso had reported that related the visit, there were about 200 pre-booked rooms in a Lisbon hotel for August 20-25.

Neither confirmed nor denied by official sources, the themes for the visit would be “essentially economic” and concerning the “future role of Lajes Airbase” on Terceira Island, Azores. President Trump could stop on Terceira Island in the Azores and visit Sines port in Portugal mainland.

President Donald Trump expressed a desire to visit Spain when he received King Felipe VI and Queen Letizia at the White House in June 2018.