The Portuguese and the Irish have more in common than you might think. It’s not just that they inhabit small lands on Europe’s western edge, have a long Catholic history, revel in tradition and have a penchant for getting themselves into terrible debt.

The Portuguese and the English famously claim the world’s oldest alliance. Despite a fracas or two along the way, this diplomatic accord has been in place for hundreds of years.

It turns out, however, that the Portuguese and the Irish have been rather more than just good friends for thousands of years. 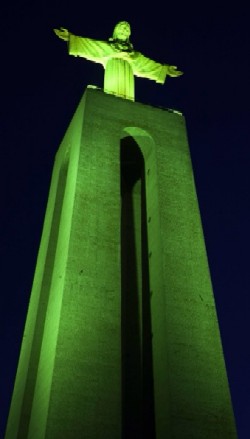 Cristo Rei monument in Almada, overlooking Lisboa from across
the Tejo estuary.

Recent scientific research has all but banished the notion that the Irish are descendants of Celtic people who migrated to the Emerald Isle from central Europe during the Iron Age. DNA analyses suggest instead that the inhabitants of Ireland have a distinctive Atlantic heritage shared with the Celtiberians of Portugal and Galicia that dates back to the end of the last Ice Age.

So it is appropriate that this year’s ‘global greening’ celebration to mark Ireland’s national day, March 17, in honour of St Patrick, has been intensified in Portugal.

For this the sixth global greening, the number of iconic Portuguese landmarks flood-lit in Ireland’s national colour has been increased from one to three: the statue of the Duque da Terceira in central Lisbon, the monument of Christ the King in Almada on the south bank of the Tagus, and the Palace Museum Condes de Castro de Guimarães in Cascais.

The worldwide total of 125 sites bathed in green in 25 countries includes the Coliseum in Rome, the Sacré Coeur in Paris, the Empire State Building in New York, the leaning Tower of Pisa, the London Eye, Niagara Falls, the Grimaldi Palace in Monaco and Christ the Redeemer Statue in Rio de Janeiro.

The lights came on at sunset on the eve of St Patrick’s Day and will continue in some places, including Cascais, until Saturday. 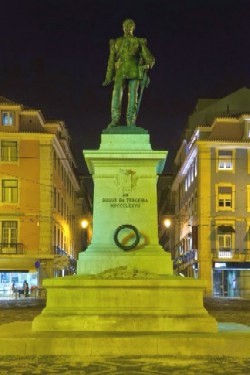 From long ago, and at times due to severe domestic hardships much worse than Troika-imposed austerity, Ireland became one of the world’s greatest sources of hard-working immigrants.

“More than 70 million people around the world claim links to the island of Ireland and St. Patrick’s Day is a truly unique opportunity to reconnect them with their heritage,” said Anne Webster, the Irish Ambassador to Lisbon, on the eve of this year’s celebration.

She pointed out that amid all the colour and the craic, there was good reason to raise glasses to Ireland’s prosperity and how it was overcoming its problems within the Eurozone.

“Our economic recovery has gained a strong momentum in the past 12 months, based on solid growth and job creation. We had the fastest growing economy in the European Union in 2014, with GDP growth of almost 5%, and we expect to retain this lead position in 2015.

“Unemployment continues to fall from a peak of 15.1% to its current level of 10.1%. Export levels are higher than before the crisis. Our public finances are now on a stable and sustainable footing and we have access to normal financial market funding, at record-low interest rates. Consumers, businesses, investors and global markets have renewed confidence in our economic future.”

Cloaking historic shrines in green makes good business sense too. As the newspaper Diário Ecinómico put it: “It’s an Irish trademark which is seducing more and more countries – and tourists.”

Ambassador Webster spoke of an international wave of media coverage, with images of greened landmarks in print, TV, online publications and social media, having a hugely important economic and tourism impact at a time when many are planning their overseas holidays.

“This is a joyous two-way process, as images of Lisbon’s magnificent monuments are transmitted internationally, at prime time, to a vast, appreciative and engaged audience.”

But the real significance of the greening in Portugal is of even more fundamental importance: “When you see the beautiful monuments of this region light the night skies with their cloaks of sparkling green, I invite you to think of Ireland, and of the strong bonds of history and friendship which unite our two countries,” said Mrs Webster. 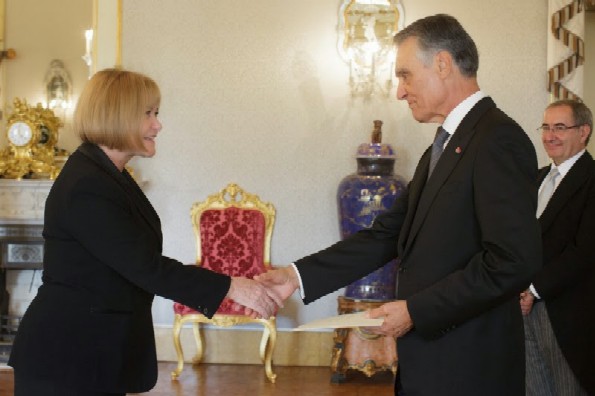