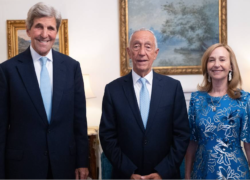 Former US Senator, State John Kerry, is in Lisbon where he met, on Wednesday, Portuguese lawmakers of the Council of State [Conselho de Estado] at the invitation of the President of Portugal Marcelo Rebelo de Sousa.

The Council of State is the advisory body of the President of the Portuguese Republic. John Kerry, served as the 68th United States secretary of state from 2013 to 2017 under President Barack Obama.

The Special Presidential Envoy for Climate, John Kerry, is in Lisbon to lead the US delegation to the United Nations Ocean Conference, which runs until July 1. The event was convened by the United Nations General Assembly and co-hosted by the Governments of Kenya and Portugal.

Following the meeting, the President of the Portuguese Republic remarked that the US presidential envoy for the United Nations Ocean Conference, praised Portugal and opposed a change of course due to the pandemic or the war.

John Kerry had warned investors, on Tuesday, that it is imperative to implement measures against the worst consequences of the climate crisis. appealed to investors for a change: “Why do I get frustrated? Because we can do better. We’re just doing business as usual.”

On his visit, he was joined by Assistant Secretary of State for Oceans and International Environmental and Scientific Affairs Monica Medina. The interagency delegation will also include Deputy Director for Climate and Environment at the White House Office of Science and Technology Policy Dr. Jane Lubchenco, White House Council on Environmental Quality Chair Brenda Mallory, and National Oceanic and Atmospheric Administration Administrator Dr. Richard Spinrad, as well as other high-level officials from across the U.S. Government.

The invitation of the President of Marcelo Rebelo de Sousa to John Kerry to participate in the Council of State meeting was made on February 11, 2022, at a meeting that the two attended in Brest, France, on the sidelines of the international summit “One Ocean” promoted by the French presidency of the European Union.