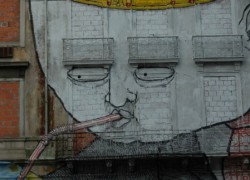 A graffiti display in Lisbon was listed among the top 10 best street art in the world, by London-based newspaper Guardian. The artists were selected by designer and critic Tristan Manco.

The honored art work is a collective project by Brazilian twin brothers “Os Gêmeos” and the Italian and Spanish duo “Blu SAM.” The graffiti is painted on a vacant building at Avenida Fontes Pereira de Melo, in Lisbon. 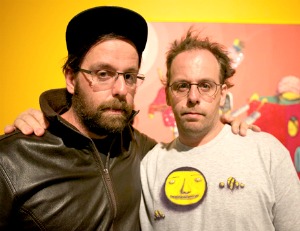 “This extraordinary work by Blu and Os Gêmeos, giants of the worldwide street art scene, illustrates how urban art can confront social and political issues in a powerful uncensored way,” the Guardian critic wrote.

The painting was created in May of 2010, under the Cronos project initiative, in partnership with the City of Lisbon, when Portuguese and world artists were invited “to bring color” to vacant buildings in the city.

Portuguese artist Alexandre Farto (Vhils) is also listed by the Guardian for work he created in London at a street art event sponsored by the Cans Festival in 2008.

“Vhils is a Portuguese artist who constantly innovates with new techniques and approaches to his art. Much of his work is created in situ and focuses on the transitory nature of the city, its history, and the lives of its inhabitants,” said the Guardian critic.