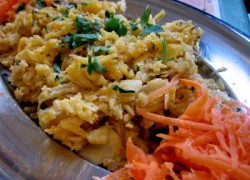 From the plainness of boiled cod fish soaked in olive oil to squid and prawns delicacies, Lisbon is an exciting culinary destination, at least for New York Times food critic Seth Sherwooh.

He got it all right: from the mom-and-pop joints to the ambitious upstart restaurants,  Lisbon dining scene can be pungent and oily, salty and crispy, suffused in tropical aromas or laced in Asian spices. It is simply wonderfully zesty!

Sherwood who has featured Lisbon before for the New York Times also found out that “Although the city’s reputation as the seat of a maritime trade empire has long since faded, when it comes to cuisine, this might well be Lisbon’s Golden Age.”